CEO of Astra Agro, the Most Admired CEO 2019 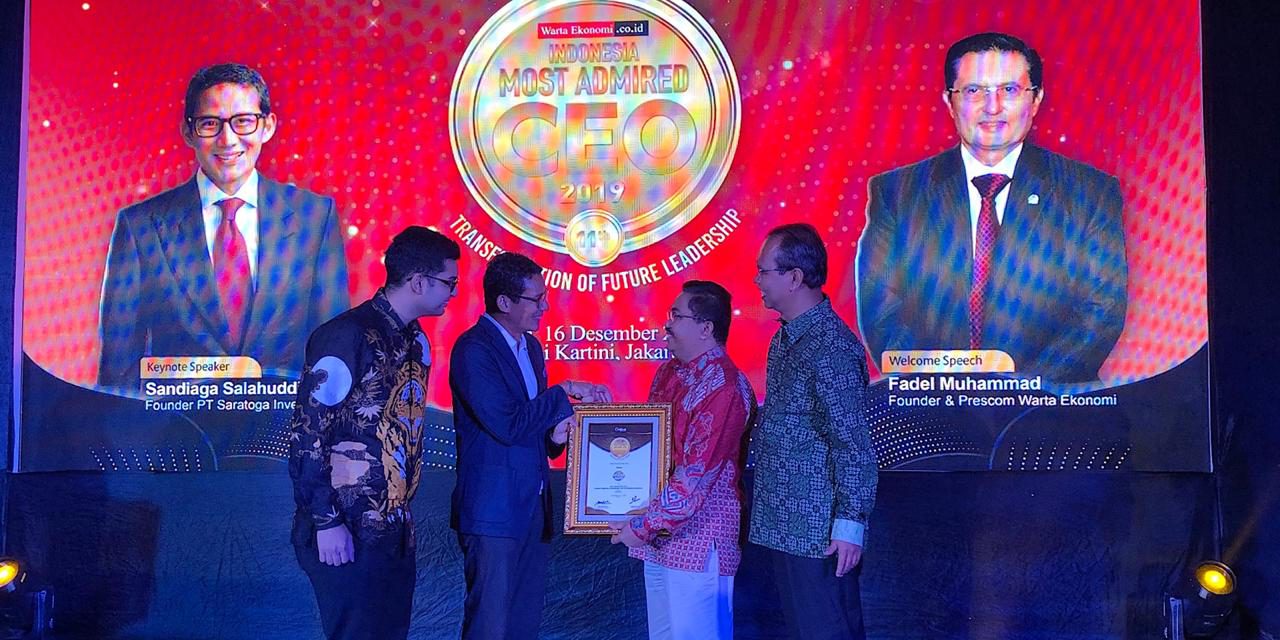 PT Astra Agro Lestari Tbk (Astra Agro) President Director, Santosa has been appointed as Indonesia’s Most Admired CEO 2019 by Warta Ekonomi. He is considered as the CEO with extraordinary leadership in the field of Sustainable Palm Oil Plantation Development.

The award was given by Chief Editor of Warta Ekonomi Muhamad Ihsan and PT Saratoga Investama Tbk Sandiaga Uno Founder at Balai Kartini on Monday (12/16/19).

“Indonesia Most Admired CEO 2019 is an appreciation in the form of award for the company’s CEO who is able to show quality and image of the most admired CEO preference.” Said Muhamad Ihsan.

The award was given to the CEO of Astra Agro for being able to demonstrate the quality and image of the most admired CEO. Namely, the CEO who is recognized by the community as he has been evaluated, has gained reputation, vision and innovation, and succeeded in bringing the company he leads grow and develop.

“As we know, the Indonesian economy is experiencing a breakdown lately, for that I appreciate the leaders of companies who have been optimistic in developing our country.” Said Sandi.

In the assessment process, the Warta Ekonomi research team used quantitative research with  online questionnaire method of 1,500 respondents in the period from October to November 2019 to capture their perceptions including employees with managerial, general manager, and director positions that had worked for at least three years at national private companies , state-owned companies, or foreign companies.

The basis of the assessment is the quality of competence, credibility, and caring for the selected CEO that is translated into criteria: Leadership, Professionalism, Personality, and Achievement (performance).

Under his leadership, Astra Agro began to integrate digital technology in order to support operational needs. Big data centric based innovation is encouraged to facilitate management in developing work systems that are more productive, effective and efficient, and of course faster and more accurate.

This year, Astra Agro has begun the digitalization to support the concept that ensure all of the company’s operational activities are in accordance with standards by introducing three web-based systems and Android operating systems, namely Astra Agro Foreman (AMANDA), Mill Excellent Indicator (MELLI), Daily Indicator of Astra Agro (DINDA).

AMANDA is an application dedicated to ensure all company operational activities are in accordance with standard operating procedures (SOP). Meanwhile MELLI is an application designed specifically to accommodate the company’s management needs for fast and accurate data from palm oil mills (PKS) for effective decision making. Finally, DINDA is an application that focuses on developing system models that support the Operational Excellent concept. (*)