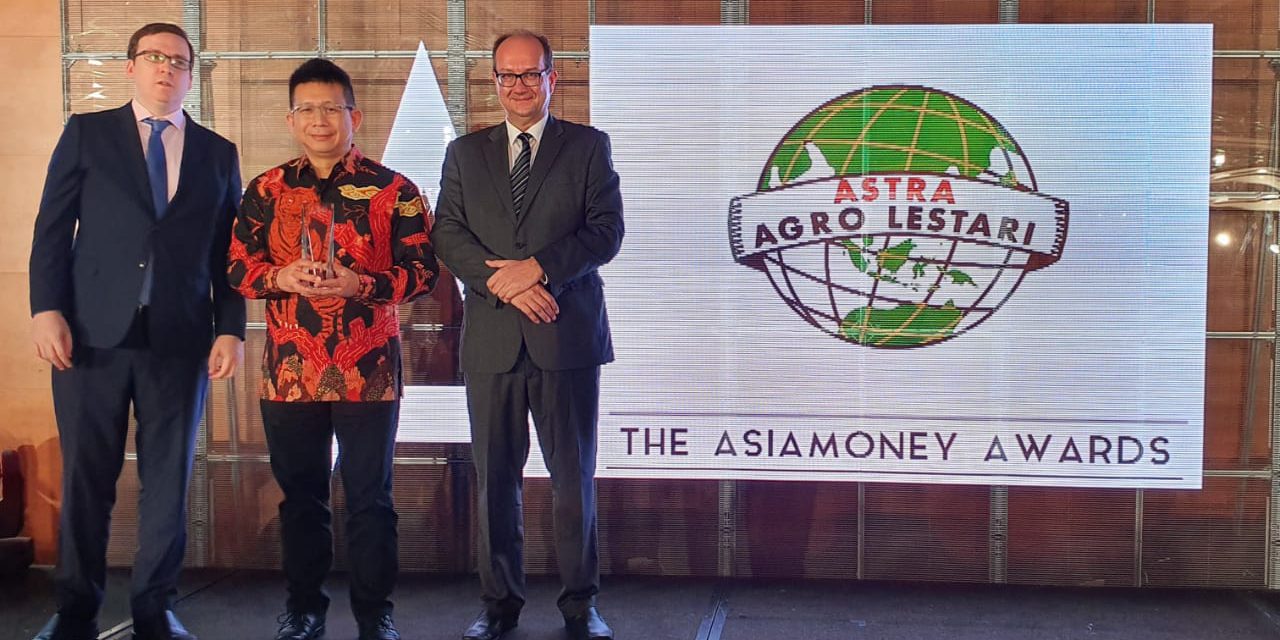 SINGAPORE – Indonesian palm oil companies are still experiencing pressure. The low price of Crude Palm Oil (CPO) on the world market since the end of 2018 has not yet shown a good stretch. Behind these conditions, Astra Agro lestari as one of the largest companies in the palm oil industry in Indonesia was appointed as Asia’s Outstanding Companies Poll 2019. The award was given by the well-known economic magazine Asia Money in Singapore (25/9/19).

Astra Agro is one of 16 other companies from Indonesia that received awards in 15 sectors or categories. As mentioned earlier, Astra Agro was named as 2019 Asia’s Outstanding Company in Indonesia, Agriculture Sector, and an award also given to global companies from 11 other Asian countries

As reported on the Asia Money website (euromoney.com), this award is given to public companies. The company has performed very well in the fields of finance, management, investor relations’ activities and initiatives in carrying out Corporate Social Responsibility programs (CSR).

The award-winning companies were selected based on a poll conducted by 824 investment managers, buy-side analysts, bankers and research analysts on July 12 last. From the results of the voting, more than 4,004 votes were participated in the selection of publicly traded companies from 12 stock exchanges in Asia. As a result, as many as 153 companies are set to receive appreciation in their respective sectors and stock exchanges.

Market mechanism that determines the formation of prices based on supply and demand. The abundant supply of world vegetable oil due to very high production last semester caused the weakening of Crude Palm Oil (CPO) prices. One of them is Astra Agro, which recorded a decline in profit of up to 94.42% in the first half of 2019.

Astra Agro’s net profit decreased to Rp 43.72 billion from Rp 783.91 billion on the first semester period last year. One reason is the decrease in net income while there was an increase in cost of revenue. This semester, Astra Agro’s net income dropped to Rp. 8.53 trillion or 5.49%.

Nevertheless, President Director of Astra Agro, Santosa considers this decline as a natural phenomenon. Santosa explained, the correction of Astra Agro’s production was still within the predicted range, especially after the main harvest in the second semester of last year and a short working day to welcome the Eid. However, Astra Agro is focusing on efficiency programs, including preparing work program for next year so that we are ready to face the uncertain global market conditions.

“We re-evaluate both opex and capex to mitigate weakening prices ahead of the main harvest and also to mitigate cash flow so that the balance sheet and astra agro cash flow remain under control. Some operational activities which can still be postponed will be rescheduled, including the planned capital expenditure will be tightened “. Santosa said.

Furthermore, regarding the balance sheet, Santosa explained that currently Astra Agro’s debt is fully Hedge. So that the stability of Astra Agro’s balance sheet is maintained without being affected by the exchange rate, then the company does not gain an exchange rate advantage by weakening the US dollar against the rupiah in the first half of 2019. Astra Agro continues to prepare itself to face the worst possibility during the upcoming semester. (*)