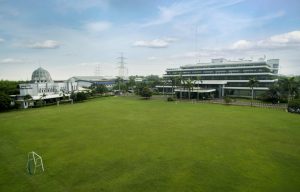 From its inception, the Company entered a collaboration with the local population using nucleus-plasma and Income Generating Activity (IGA) models, as well as other activities aimed at improving the livelihood of the communities living

As the business steadily grew, in 1997 the Company decided to go public and an IPO was made through the Indonesia Stock Exchange (at that time named the Jakarta Stock Exchange and the Surabaya Stock Exchange). In 2016 the Company also undertook a Limited Public Offering in an amount of approximately Rp 4 trillion. Currently, shares owned by the public amount to 20.32% of the total 1.92 billion shares in circulation. The strong value of the shares on the Stock Exchange reflects the great confidence of investors in the company. On the last trading day on 30th December 2016, the company’s shares listed as “AAL” closed at Rp 16,775 per share.

Apart from operating the oil palm plantations, the Company also diversified by developing a relevant downstream industry as a strategy to safeguard the continuity of its business. It is currently also operating a palm oil refinery in the Mamuju Utara Regency in West Sulawesi Province, and in Dumai, Riau Province. Processed palm oil products taking the form of olein, stearin, and PFAD produced by the refinery serve to meet market demand for export, among others from China and the Philippines. In 2016 the Company also set up a fertilizer blending plant in Donggala Regency, Central Sulawesi Province. In addition, the Company also initiated an integrated cattle-in-plantation business.

Looking toward the upcoming challenges, the Company focuses its business strategy on the improvement of productivity, efficiency at all strata, and diversification of business in prospective sectors related to palm oil as its core business