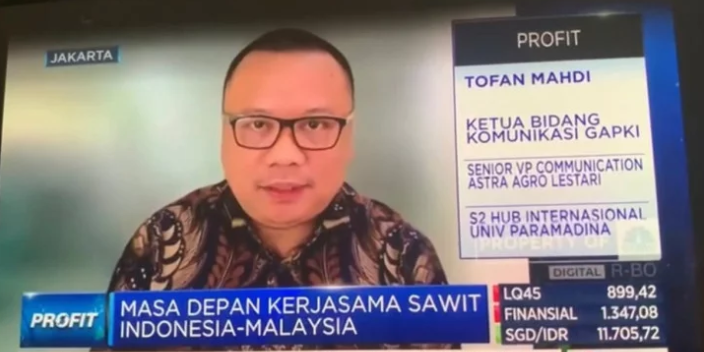 JAKARTA — Indonesia and Malaysia are in need of strong commitment to strengthen their synergy in defending their positions as the world’s largest producers of palm oil, which has been long the target of negative campaigns at the global market.

Tofan Mahdi, Head of Communication Division at the Indonesian Palm Oil Association (GAPKI), said that with production volume of Indonesia at 50 million tons and Malaysia at 22 million tons, the two countries dominate the global market of vegetable oils.

“Considering the fact, Indonesia and Malaysia should be always solid in their cooperation in fighting against the negative campaigns launched by certain groups to discriminate and weaken the competitiveness of palm oil at the global market of vegetable oils,” Tofan said during an interview with CNBC Indonesia on Tuesday, 10 January 2023.

According to him, through their strong commitment Indonesia, Malaysia, and other palm oil producing countries grouped in the Council of Palm Oil Producing Countries (CPOPC) will keep their solid cooperation and further improve it along their way of defending the palm oil.

Tofan said that as the world’s largest producer of palm oil at the global market,  Indonesia and Malaysia are still facing discriminations and negative campaigns launched by other countries that produce other vegetable oils besides palm oil.

Meanwhile, the Association of Indonesian Oil Palm Smallholders’ (Apkasindo) Chairman Gulat Manurung said that the oil palm smallholders should be always involved in the diplomacy and negotiations to fight the trade discriminations by the developed countries, including those in the European Union (EU).