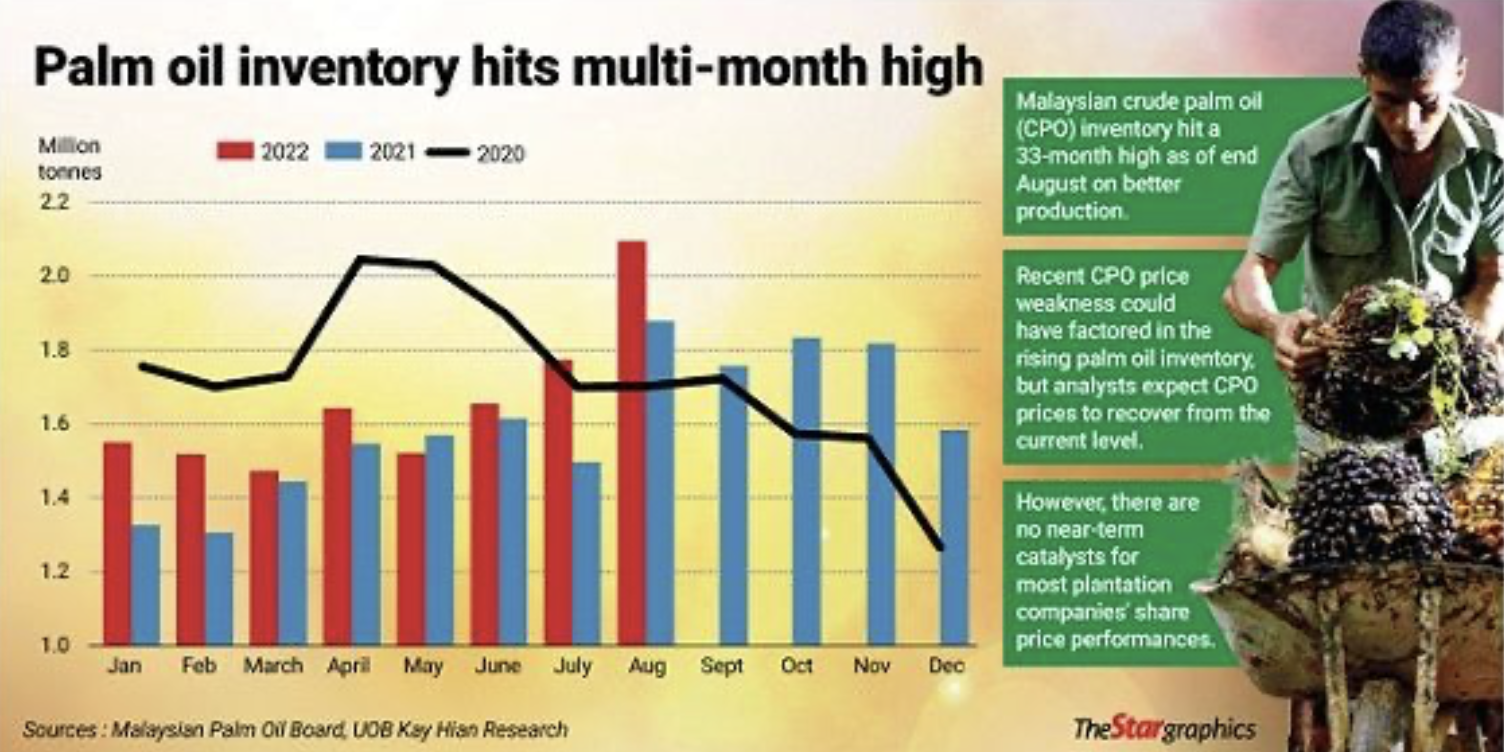 Earnings of plantation companies have likely peaked in the second quarter of 2022 (2Q22) as the average crude palm oil (CPO) price of RM4,116 per tonne in July-August is more than one-third lower compared with 2Q22.

CGS-CIMB Research said CPO prices could weaken due to higher Indonesian palm oil exports following the recent extension of the palm oil export levy waiver to Oct 31, as well as due to the current high palm inventories.

“However, the downside will be capped by the current CPO wide pricing discount of US$531 (RM2,393) per tonne against soybean oil as at Sept 8, 2022,” said the research firm in a note to clients.

It said the sharp drop in the average CPO price in July-August to RM4,166 per tonne (2Q22: RM6,552), coupled with higher operating costs due to the RM1,500-per-month minimum wage and rising fertiliser costs, are likely to weaken 3Q22 earnings of upstream plantation companies, which sell CPO on spot basis.

“However, the downside could be capped by the industry’s attractive dividend yields of 4% to 5% and the sector’s undemanding price-to-earnings ratio,” said CGS-CIMB Research.

It projects palm oil stocks to rise 9.2% month-on-month (m-o-m) to 2.29 million tonnes by end-September 2022 and could likely peak in October or November as rising output beats the higher exports.

It said the rise in palm oil stocks is negative for CPO price in the short term as it suggests ample palm oil supply in producing countries.

As at end-August, local palm oil stocks, which rose 18.2% m-o-m to 2.09 million tonnes, had come in higher than analysts’ expectations.

According to the research firm, the recent CPO price weakness could have factored in the rising palm oil inventory.

However, it does not expect CPO prices to recover from the current level as production from both Malaysia and Indonesia towards 4Q22 may not be as great as market’s expectation. “Thus, end-2022 inventory may not be at a burdensome level yet.

On the first half of 2022 (1H22) results for plantation companies under its coverage, the research firm said: “They were mostly within our expectations, with companies’ earnings coming in higher year-on-year for 1H22, thanks to high CPO prices.

“However, Genting Plantations Bhd’s earnings came in way higher than our and consensus’ projections, mainly due to the unexpected low fertiliser application.

“Both IOI Corp and Kuala Lumpur Kepong Bhd earnings were slightly above our expectations, with higher contribution from the downstream operations as the Malaysian downstream benefited from the Indonesian export limitation – resulting in improved demand in 2Q22.”

For 2H22, UOBKH Research expects most of the plantation companies to report lower earnings due to the softening CPO prices and higher cost of production (due to rising fertiliser costs and higher wages) despite improved production.

Speaking at the 7th International Palm Oil Sustainability Conference 2022 yesterday, Wan Aishah said that in the last few decades, the has faced multiple sustainability challenges from accusations of deforestation and the attrition of endangered wildlife to global warming, the sustainability of palm-based biofuels and the recent forced labour issues in the United States.

She said the conference will highlight challenges, particularly on the impact of environmental, social and governance and green financing on agricultural commodities, especially palm oil, as well as climate change and deforestation-linked legislations.

There will be presentations by policymakers, experts as well as discussions on mechanisms and facilities required to support independent smallholders to meet global sustainability requirements, she said in her welcoming remarks at the conference.