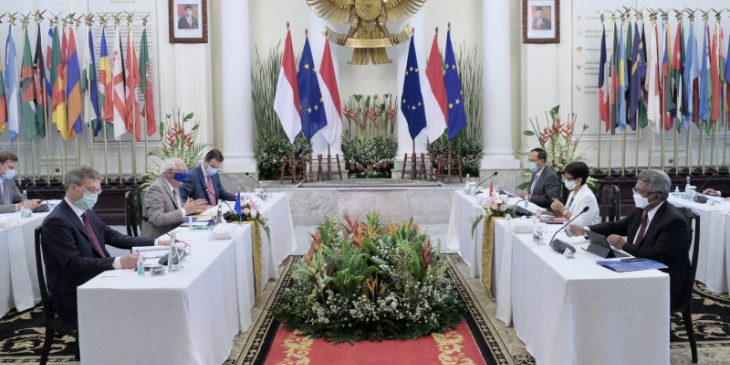 “Indonesia’s request is simple that fair treatment be given to Indonesian palm oil,” Marsudi remarked during a virtual press statement after meeting with the EU High Representative for Foreign Affairs and Security Policy Josep Borrell here on Wednesday.

In a bid to encourage mutually beneficial economic cooperation between the two parties, the Indonesian government remains committed to producing palm oil in a sustainable manner and continues to strengthen the Indonesia Sustainable Palm Oil (ISPO) certification, the minister noted.

“I say that fair, non-discriminatory, and open economic and trade cooperation will help accelerate economic recovery,” she stressed.

The Indonesia-EU trade was marred by a dispute over palm oil in 2019 following an EU policy of Renewable Energy Directive II (RED II) and the Delegated Regulation reportedly to limit access to biofuel products viewed as not being environment-friendly and not sustainable.

Under the EU rules on renewable energy, the use of palm oil-based fuels will be phased out by 2030, as palm oil had allegedly caused deforestation and did not quality as a renewable fuel.

However, the EU’s top representative, Josep Borrell, clarified that no ban was applied on the imports of palm oil in Europe. In fact, he claimed that palm oil imports in Europe had risen by 26 percent in 2020.

“This means there are no restrictions and only sustainability issues that we must solve together,” he stated.

Acknowledging that the palm oil issue had jeopardized the relationship between the EU and Indonesia, Borrell expressed readiness to work together in pursuit of a solution to the problem.

“I am very aware of the importance of palm oil for the Indonesian industry and society and also for people, who have come out of poverty, and we must find solutions that can take into account the mission of sustainability and development. We will work together on it,” he affirmed.

Palm oil is one of the most crucial commodities in Indonesia’s foreign trade. The Indonesian Palm Oil Association (GAPKI) had estimated foreign exchange earnings from palm oil to touch nearly US$21 billion (around Rp298.2 trillion) in 2020.

Indonesia had filed a lawsuit against the EU’s discriminatory policy at the World Trade Organization (WTO) in 2019 along with fellow palm oil producer, Malaysia.

The Malaysian government announced on May 31 that the WTO had approved Kuala Lumpur’s request to establish a panel to examine the EU regulations pertaining to restrictions on the use of biofuels made from palm oil. Related news: Indonesia urges EU to accord fair treatment to palm oil