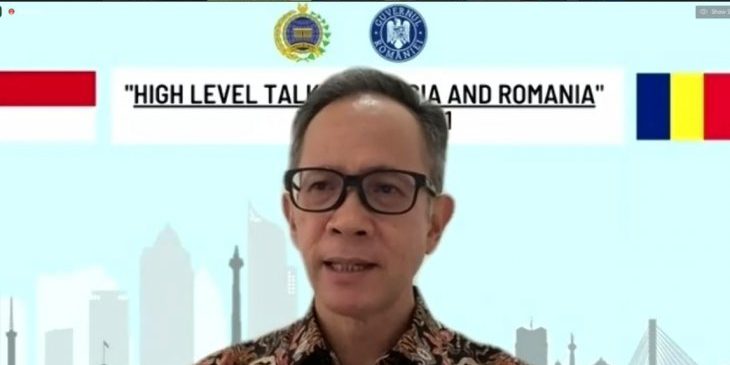 Indonesia and Romania have agreed to increase cooperation in the fields of economy, trade, investment, counter-terrorism, COVID-19 handling, and mutual support at international forums during high-level talks held virtually on Thursday.

Deputy Foreign Minister Mahendra Siregar and director general of American and European affairs at the Foreign Ministry, Ngurah Swajaya, co-chaired the Indonesian delegation at the meeting, according to a written statement released on Friday.

He also highlighted trade barriers imposed by the European Union against palm oil during the meeting and asked Romania, as a member of the 27-nation bloc, to deal with them.

Indonesian palm oil has met the specified standards, he said adding, the barriers have also had an impact on coconut oil, which is one of the main products of Indonesia and several other ASEAN member states.

During Thursday’s meeting, the Indonesian delegation also invited Romania to join the hybrid business meeting between Indonesia and Central and Eastern European countries in mid-2021.

Romanian Foreign Minister Cornel Feruta, who led the Romanian delegation at the meeting, offered his sympathy to Indonesia over the suicide bombing outside Cathedral Church in Makassar, capital of South Sulawesi province, on Sunday (March 28, 2021).

Indonesia is also one of the tourist destinations frequented by Romanian travelers. In 2019, a total of 18,650 Romanian tourists visited Indonesia, an increase of 32.3 percent compared to 14,092 in 2018. (INE)