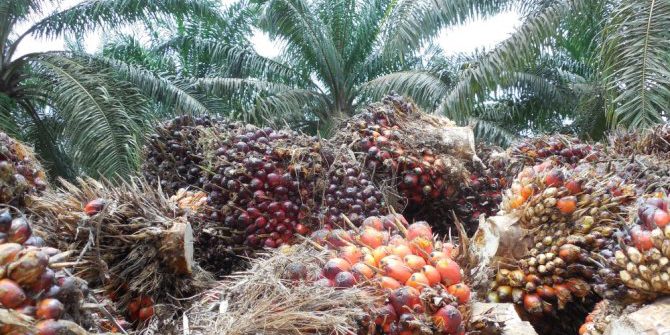 Indonesia’s palm oil production is controversial due to its contribution to climate change and loss of biodiversity as a result of large-scale deforestation. Researchers at Wageningen University & Research joined forces with partners in the USA and Indonesia to show that Indonesia can meet the future demand for palm oil in a climate-friendly way without endangering high-carbon woodland, peatland and existing farmland. An article on this topic has been published in Nature Sustainability.

Across the world natural ecosystems are being converted into agricultural land on a massive scale, and oil palm is often mentioned as an example in this context. In Indonesia, palm oil production increased sixfold between 2000 and 2018. This involved planting an additional 10.2 million hectares of land, one third of which was at the expense of woodland and peatland. However, the net palm oil yield per acre did not increase during this period. Researchers have now shown that investing in a sustainable increase in yield on existing acreage makes further extension of oil palm acreage on carbon-rich wood and peatland unnecessary, and can hopefully put an end to it. This would prevent further loss of biodiversity and higher greenhouse gas emissions.

Current and potential yield
Wageningen University & Research (WUR) used a crop growth simulation model (PALMSIM) and long-term climate data to calculate Indonesia’s maximum potential rain-dependent yield. Since in reality this kind of maximum yield is often not economically and logistically feasible, an attainable yield has been defined as 70% of this maximum. This enabled researchers to compare the yield of large plantations and small farms, which was on average respectively 38% and 47% below this level.

This means that Indonesia can potentially considerably increase its yield with improved crop management. But is this also feasible in practice? And how does it relate to the ambition of the Indonesian government to increase palm oil production from 41 metric ton (MT) in 2018 to 60MT in 2035, an increase intended not only to meet growing demand, but also to finance Indonesia’s economic development?

Scenario study
In order to answer these questions, Wageningen researchers joined forces with colleagues from the University of Nebraska-Lincoln and Indonesian oil palm and agricultural research institutes to formulate a number of scenarios for a yield of 60 MT in 2035. To do so, researchers began by identifying and quantifying the current acreage of primary and secondary woodland, peatland, farmland and other vegetation types. They then calculated for each land type what the net greenhouse gasses emissions would be if this land was converted to oil palm plantations. Net carbon sequestration means in this case that oil palm would sequester more carbon than the existing vegetation. The calculations also included greenhouse gasses emissions linked to production and the use of chemical fertiliser and other inputs required to increase yield per hectare.

Three future scenarios
If extension of acreage proceeds at its current pace with no changes in yield per hectare, meeting the 60MT objective would require an additional 9.2 million hectares, 30% of which would have to come from woodland and peatland. This would result in a great loss of biodiversity and a net loss of 767 MTCO2Eq of greenhouse gasses. Such a strong impact on climate change is highly undesirable.

“If however sufficient funds are invested in existing oil palm plantations to fully close any gaps in yield, then an increase in yield of 3% per hectare per year is needed. Although this would mean that no additional acreage was required and a reduction of 60% in greenhouse gas emissions is achieved, such a high increase in yield per hectare is unrealistic,” says WUR researcher Maja Slingerland, Associate Professor at the Laboratory of Plant Production Systems.

This is why the choice ultimately fell on a more moderate scenario which presupposes an increase in yield of 1.25% per hectare per year. In addition, no land extension is allowed on peatland or at the expense of high-carbon woodland or existing farmland. In this scenario, 2.6 million hectares of high-carbon woodland and peatland are saved compared to the historical trend. In addition, vegetation types with low carbon sequestration levels per hectare are replaced with oil palm plantations with a higher carbon sequestration level. Together, this represents a relative gain of no less than 732 MTCO2Eq of greenhouse gasses, making the net emissions fall below 5% of the first scenario. It is therefore much more climate-friendly than the current method of extending acreage.

Where to start?
It goes without saying that high-carbon woodland and peatland must be protected. The government’s recent moratoria but also international investments in, for example, REDD+ programmes are highly promising initiatives in this context. Slingerland: “Based on our study, we believe these kinds of initiatives should be combined with public and private investments to increase yield per hectare. This approach may also prove useful for other countries where climate objectives conflict with economic objectives.”