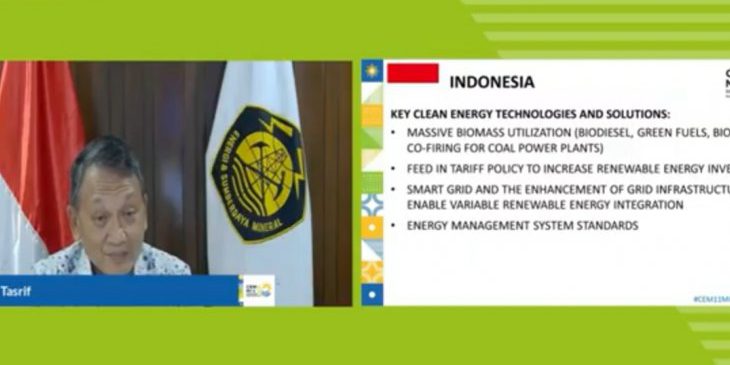 “We have huge renewable energy potential, reaching 400 GW. Hence, it is very important for us to regulate the energy utilization system. We are taking strategic steps in regulating the use of this energy,” he affirmed.

The country will optimize the utilization of domestic energy sources, particularly renewable energy.

“The state electricity company PT PLN is launching a conversion program from diesel power plants to renewable energy, with a capacity of 2 GW, in over two thousand locations across the country,” he stated.

The second step is to induce energy efficiency, both on the supply and demand side, he remarked.

“Currently, we are building the largest floating solar power plant (PLTS) at the Cirata Reservoir, West Java, with a capacity of 145 MW. This project will significantly enhance the energy mix in the Java-Bali electricity system,” he expounded.

Indonesia has vast sources of biomass energy, specifically from forests, agriculture, and waste, deemed important to be utilized as alternative energy to replace fossil energy.

By developing biofuels, Indonesia has gradually reduced the use of fossil energy sources with biodiesel and built a green refinery to maximize the potential of its palm oil.

Tasrif also drew attention to Indonesia’s readiness to participate in the Biofuture Platform Initiative in Accelerating the Transition to a Sustainable Low-Carbon Bioeconomy by optimizing the use of bioenergy potential in Indonesia.

To support global commitments to reduce emissions, Indonesia has outlined a target for renewable energy to account for 23 percent of the country’s energy mix by 2025.

Indonesia also remains resolved to lowering emissions by 29 percent by 2030 and 41 percent according to the mitigation scenario.

“To achieve this ambitious target, the Indonesian government requires support and assistance of colleagues from around the world,” he added.