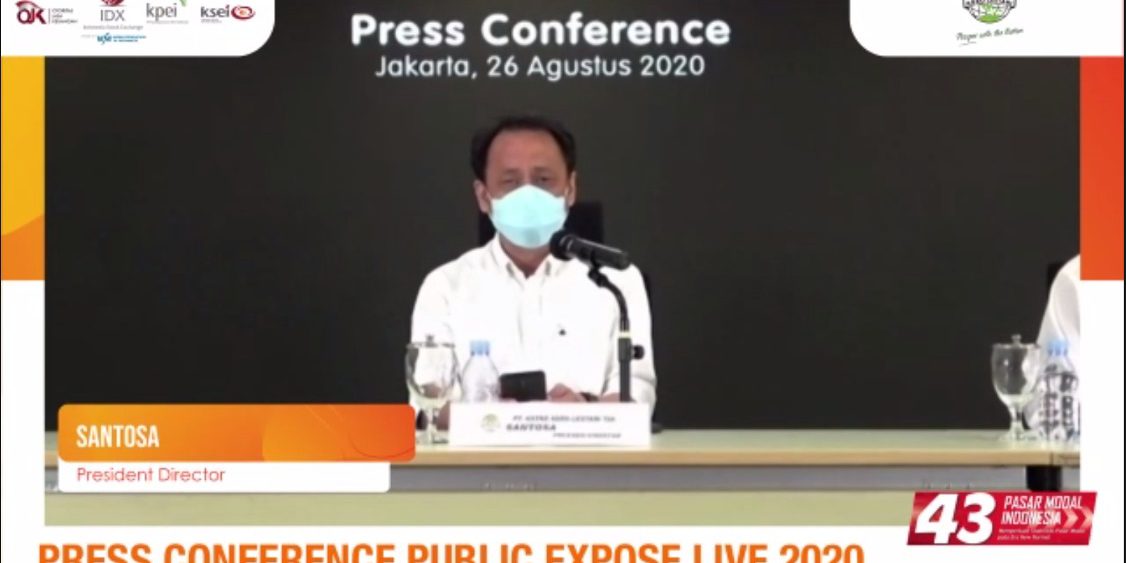 The company’s revenue increased by 6.5 percent to Rp 9.08 trillion (US$623.78 million) during the first six months of the year compared with the corresponding period last year. At the same time, its net profits soared by 796.5 percent to Rp 391.9 billion from Rp 43.72 billion in last year’s first half.

Meanwhile, its cost of revenue, or the total cost of manufacturing and delivering a company’s products to its customers, declined by 0.25 percent to Rp 7.78 trillion in this year’s first half, the company’s financial statement states.

“With this kind of [commodity price] fluctuation, the company has no other choice than to implement a strategy of operational excellence to maintain our processes so that the costs can be optimal,” Astra Agro president director Santosa said during a virtual press conference on Wednesday.

“By doing so, when there’s a decrease in prices, we will become the most competitive. But when the prices rise, we will generate relatively better profits than similar companies in this industry,” Santosa added.

Astra Agro, a subsidiary of diversified conglomerate PT Astra International, reported that its average crude palm oil (CPO) sale price increased 25.9 percent year-on-year (yoy) to Rp 8,109 per kilogram during the first half of this year from Rp 6,441 per kg in the same period last year. The CPO price has been boosted by the government’s mandatory B30 blended biodiesel program.

At the same time, the company’s CPO production fell 15.2 percent yoy to 707,000 tons as a result of dry weather since last year.

Aside from strategizing against commodity price volatility, the company has limited the risk of foreign exchange fluctuation by hedging all its United States dollar-denominated bank loans while also hedging all its exports. Hedging is an investment practice deigned to reduce the risks of adverse price movements.

The rupiah crashed to as low as Rp 16,575 per dollar, the lowest since 1998, in March amid massive capital outflows due to global fears of the COVID-19 pandemic. The currency has rebounded and pared the loss back to just 6.36 percent so far this year and traded at Rp 14,640, a 0.14 percent appreciation against the greenback as of 2:25 p.m. Jakarta time on Friday.

However, Santosa noted that “we can’t do total hedging of our production because that will eliminate the potential for gain when the price is good”.

Prioritizing the biggest margins is part of the company’s strategy. Santosa explained that the company did not particularly target the domestic or the export market, as it gravitated toward the best price available in the market. The company reported that 56 percent of its sales were from exports while 44 percent were domestic sales.

During the press conference, Astra Agro finance director Mario Casimirus Surung Gultom said the company’s 2020 capital expenditure (capex) had to be reassessed in response to the COVID-19 pandemic, which has disrupted business activity and weakened demand.

“The [revision] will not be far off Rp 1 trillion. It could be around Rp 200 billion to 300 billion less than the plan,” Santosa said, adding that the company was postponing capex that was considered less essential to anticipate deteriorating operating conditions in the future.

Astra Agro’s share price, traded on the Indonesia Stock Exchange with the code AALI, climbed 0.5 percent as of 2:29 p.m. on Friday to Rp 10,075 apiece.

Throughout the year, the company has lost 30.87 percent of its value, a notably poor performance in comparison with the agriculture sector index and the benchmark Jakarta Composite Index, which have fallen by 22.28 percent and 15.23 percent, respectively.