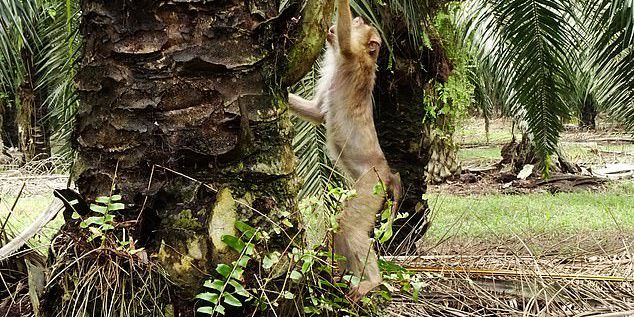 Found as an ingredient in many processed and packaged foods, palm oil is the most widely consumed vegetable oil. Now, researchers reporting in Current Biology on October 21 have discovered an unlikely ally for palm oil production: pig-tailed macaques.

Macaques have had a reputation as crop raiders, but the new study shows they in fact cause only relatively minor losses in palm oil yield. And, more importantly, they actively search for rats, the major oil palm pest.

“By uncovering cavities in oil palm trunks where rats seek shelter during the day, one group of pig-tailed macaques can catch more than 3,000 rats per year,” said leading author Anna Holzner of the University of Leipzig and the Max Planck Institute for Evolutionary Anthropology in Leipzig.

As a result, they say macaque visitors can reduce rat numbers by more than 75 percent, suggesting they could even replace chemicals used to kill rodents.

Nadine Ruppert, Universiti Sains Malaysia, and her team have been studying the ecology and behavior of Southern pig-tailed macaques since 2013. They soon realized that wild macaques were spending a good deal of time on oil palm plantations, which are found in a large part of macaques’ home range. They were curious to learn more about the macaques’ activities while on those plantations.

Their studies showed that macaques’ plantation diet included plenty of oil palm fruits. Although a group of macaques ate more than 12 tons of oil palm fruits per year, that’s just 0.56% percent of the overall oil palm production in the macaques’ home range. And, they make up for it by eating lots of rats. That’s key because rats cause losses of about 10 percent of production; hence, they do far more crop damage than macaques.

“I was stunned when I first observed that macaques feed on rats in plantations,” said Ruppert, the corresponding author. “I did not expect them to hunt these relatively large rodents or that they would even eat so much meat. They are widely known to be frugivorous primates who only occasionally feast on small birds or lizards.”

She was immediately intrigued by their potential role in pest control. In fact, her team reports that regular visits of pig-tailed macaques in Malaysia’s oil palm plantations could reduce crop damage from 10% to less than 3%, corresponding to a yield increase equal to crops grown over approximately 406,000 hectares (or US$ 650,000 per year).

The findings should come as good news for oil palm producers and for macaques. “We expect that our results will encourage both private and public plantation owners to consider the protection of these primates and their natural forest habitat in and around existing and newly established oil palm plantations,” said Anja Widdig, the senior author affiliated with the University of Leipzig, the Max Planck Institute for Evolutionary Anthropology and the German Centre for Integrative Biodiversity Research (iDiv) in Leipzig.

“In collaboration with local palm oil companies and NGOs, we will work towards the realization of a plantation design that maintains viable macaque populations and higher levels of biodiversity via wildlife corridors while increasing the plantations’ productivity and sustainability by effective and environmentally friendly pest control. This ultimately can lead to a win-win situation for both biodiversity and the oil palm industry.”