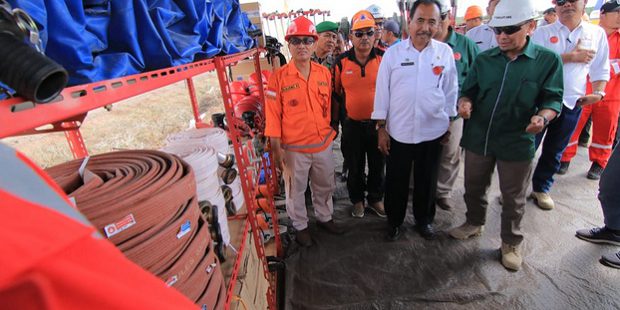 Edward Effendi, head of the Paser chapter of the National Disaster Mitigation Agency (BNPB), lauded Astra Agro subsidiary Borneo Indah Marjaya for the steps it had taken to decrease the occurrence of forest fires in the area.

“We are appreciative and grateful for the action Borneo Indah Marjaya has taken in Paser. The local government hopes other palm companies would follow in Borneo Indah Marjaya’s footsteps and become more active in preventing forest fires,” Edward said in a meeting at the company’s head office on Aug. 28.

He added that speedy identification and accuracy in the field and the fast dissemination of information through mobile text messaging applications were key to successfully preventing forest fires.

Ujang Rahmat, head of the East Kalimantan Provincial Plantation Office, said he and his team would continue to keep everyone updated on developments in the field.

Ujang said the provincial government was doing its utmost to guide communities and provide them with the tools to manage and prevent forest fires.

“Now that we’re entering the dry season, vigilance by Borneo Indah Marjaya and the community is paramount in guarding concessions from fires,” he said.

“The service is provided to members of the community, should they wish to report or request assistance in putting out fires. The company is ready to help,” he said.

Astra Agro integrates data from the Meteorological, Climatological and Geophysics Agency (BMKG) and other statutory bodies to monitor active fires in its concession areas.

The company is further working with a network service provider to transmit early warnings to people living near its concession areas. The warnings, sent by text message, remind community members to remain vigilant.