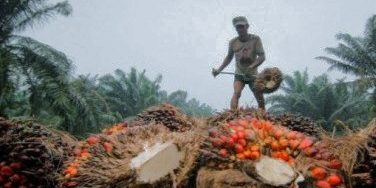 The European Union policy to ban ban the use of palm oil as a raw material for biofuels is considered potentially threatening the survival of 16 million workers in the oil palm sector in Indonesia.

The Executive Secretary of the Indonesian Palm Oil Workers Union (JAPBUSI) Network Nursanna Marpaung said that European Union policies would have an impact on the sustainability of the oil palm industry related to the protection of oil palm as a whole.

According to Nursanna, the palm oil industry in Indonesia contributes to employment as an illustration of the number of workers in smallholder, private and state plantations by as many as 3.78 million workers, as well as 2.2 million farmers.

The total number of workers involved in the supply chain of the palm oil sector, she added, reached 16.2 million.

“We condemn the actions of the EU which plans to stop buying palm oil from Indonesia. Europe should not only look at deforestation. But also think about its people,” she said in Jakarta, Tuesday (04/23/2019), in the Journalists Forum Discussion titled “Dissecting the Role and Compliance of the Palm Industry in the Labor Sector”.

“The government must be firm because it concerns the fate of workers who depend on oil palm. Our members at JAPBUSI have up to two million people working on oil palm,” Nursanna said, as quoted by Antara.

Chairman of the Manpower Sector of the Indonesian Palm Oil Businessmen Association (GAPKI) Sumarjono Saragih, said the real threat faced by the palm oil industry was due to high demands and standards in the global market.

Still according to Antara, there are six accusations that are often addressed to the oil palm industry, he added, namely employment status, social dialogue between companies and workers, occupational safety and health, employing children, minimal wages and weak government supervision.

“With environmental issues, it has been overwhelmed. Plus the issue of children and workers. If it continues to be echoed, it will have a big impact on the industry,” he said.

According to him, negative labor issues if it cannot be resolved will make the investment climate fade.

“The palm oil industry is under threat. On the one hand, operational costs, including workers’ wages continue to rise, but fluctuating palm oil prices and plantation productivity tend to be stagnant,” he said.

The International Labor Organization (ILO) Country Office of Indonesia and Timor Leste Irham Ali Saifudin said, the EU’s policy on palm oil in the short and long term would have an impact on workers reaching 16 million workers.

This has an impact on the palm oil industry and its workers because Europe is one of the main buyers of Indonesian palm oil. Therefore he suggested that a good strategy formulation should be developed to strengthen the positive aspects of palm oil information.

“In addition, the industry also needs to show good faith in order to improve plantation management,” he said.