RI-Europe deal: What are the next steps? 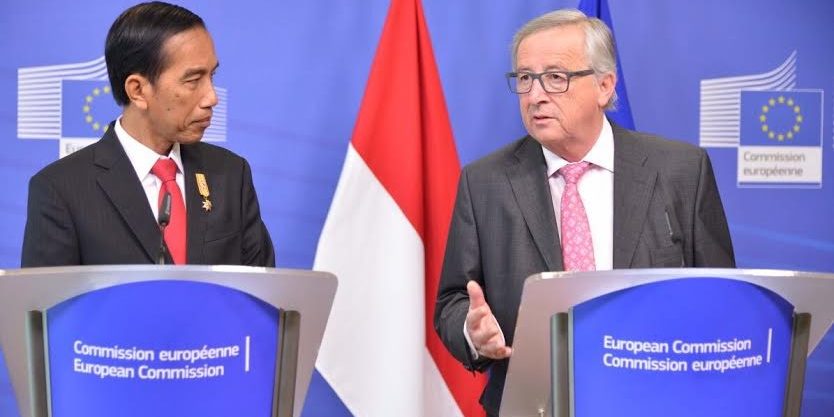 The sixth round of negotiations between Indonesia and the European Union on the Comprehensive Economic Partnership Agreement (CEPA) took place from Oct. 15 to 19 in Palembang, South Sumatra. The question remains whether we will actually benefit from these negotiations, not just economically but also socially and environmentally. Theoretically, free trade and investment agreements benefit the parties involved by reducing or eliminating tariffs, enabling lower consumer prices, boosting exports and promising economic growth for both sides better known as mutual gain in liberalism.

However, the CEPA negotiations should go beyond merely increasing trade and investment, and must also consider sustainability. The quest for maximum benefits, trade and investment might lead to breaches of human rights, violations of labor standards, and environmental degradation. Thus the understanding of “maximum benefit” should take these aspects into consideration. In this context, the inclusion of chapters on trade and sustainable development (TSD) seems to be a breakthrough in the Indonesia EU negotiations, since they are to include ambitious commitments to labor and environmental protection.

The TSD is an EU-designed approach to promote multilateral standards like international labor conventions and multilateral environmental agreements for inclusion in EU Free Trade Agreements (FTA). Ideally, the TSD chapters would have a comprehensive set of binding provisions which are, unfortunately, yet to be discussed particularly those ensuring labor and environmental protection. Even the EU’s September 2017 proposal for the TSD chapters did not include these issues.

The proposal primarily contains articles to encourage each partner to domestically pursue high labor and environmental protection. Without a binding mechanism in the TSD chapters, no significant improvements will be made in labor and environmental protection. The inclusion of palm oil in the negotiations is one of the concerns among civil society organizations (CSO) in both Indonesia and Europe, because workers in the palm oil industry are susceptible to becoming victims of human rights violations, such as exploitation, child labor, long working hours, discrimination against women workers, barriers to unionizing, and poor adherence to occupational safety standards.

The CEPA will most likely boost Indonesia’s palm oil exports to the EU. To fulfill the high demand, palm oil companies will most likely expand their plantations and increase production, which could potentially lead to increased workers rights violations and deforestation. Considering the negative impacts of free trade in palm “oil, the Indonesian and European CSOs that met in Brussels during the fifth round of Indonesia-EU CEPA negotiations in July called for palm oil to be excluded from the negotiations.

Bart-Jaap Verbeek, a researcher at the Center for Research on Multinational Corporations (SOMO), explained during a recent interview in Amsterdam that FTAs were a potentially dangerous instrument because it creted an incentive to increase palm oil production while labor rights were still being violated. Creating an economic incentive to boost this sector might exacerbate the labor rights situation a situation that the Indonesia-EU CEPA are currently ill-equipped to deal with.

The TSD chapters are there, but the provision is only voluntary and has no clear mechanisms. The idea to exclude palm oil from the Indonesia-EU CEPA was also discussed at the 11th Asia Europe Labor Forum in Brussels on Oct. 16-17. Sulistri Afrileston, vice president of the Confederation of Prosperous Indonesian Labor Unions (KSBS1) who represented Indonesia at the forum, explained that the issue was a big dilemma for trade unions. On the one hand, the unions knew that labor violations still occurred in the palm oil sector; however, the palm oil sector employed more than 7 million workers, many of which were KSBSI members that fell under the confederation’s protection.

Therefore, if Indonesia’s labor rights were among the EU”s concerns. then the EU should include clear steps for protecting workers in the CEPA negotiations, and not simply exclude palm oil front the agreement. Excluding palm oil from the CEPA negotiations could be a real conundrum for Indonesia, since palm oil is a strategic commodity for boosting economic growth. Indonesia has attempted to include palm oil in every round of negotiations, particularly on the trade and sustainable development agenda. Including palm oil in the agreement is Indonesia’s primary interest.

No palm oil means no Indonesia-EU CEPA, meaning that neither party would enjoy the benefits of a CEPA. This would be the first scenario. The second scenario is that if the TSD chapters are not improved to include a more binding mechanism or detailed steps in labor and environmental protection while palm oil is included the agreement, Indonesia risks facing exacerbated labor and environmental issues. The third scenario is that CSOs, in realizing the impossibility of excluding palm oil from the negotiations, shift focus to lobbying negotiators from both Indonesia and the EU to include a more binding mechanism in the TSD chapters.

The Generalized Scheme of Preferences (GSP) is a possible alternative. The GSP requires beneficiary countries “to put into practice key UN Human Rights and International Labor Conventions”. Compliance mechanisms or suspension in the worst case can be implemented upon breaches in labor rights and environmental standards. To ensure that the CEPA will benefit Indonesia not just economically but also socially and environmentally, more transparent negotiations are also needed. In the digital era, it should be easy for all involved to be, at the very least, informed of progress.

The EU side is more transparent, with the reports on each round and the text of the EU’s proposal relatively easier to find. Since the CEPA is expected to bring significant public impacts, it should be open to public accountability. The writers are international relations lecturers at Parahyangan Catholic University in Bandung, West Java. Stanislaus B. Apresian joined a study visit program hosted by the Friedrich-Ebert-Stiftuny European Union Office in Brussels. (Stanislaus Risadi Apresian and Sylvia Yazid)