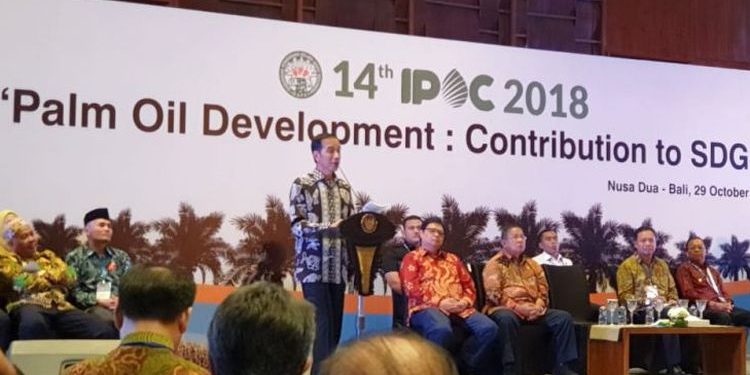 Nusa Dua. The palm oil industry forms a vital part of the Indonesian economy and makes a significant contribution to gross domestic product, while the commodity itself is one of the country’s biggest sources of foreign exchange revenue.

In view of the sector’s importance to the nation, President Joko “Jokowi” Widodo made sure to fit the official opening of the 14th Indonesian Palm Oil Conference and 2019 Price Outlook (IPOC) into his busy schedule.

In his speech during the opening of IPOC 2018, which was also attended by tycoons and the owners of various palm oil business, Jokowi said producers must implement technological advancements in their production processes.

“This is important, so that palm oil does not continuously come under fire from NGOs, or from the left, from the right, from above or from below. Sustainability is really the one aspect that needs serious attention,” he said.

The president also requested his ministers to speed up government-initiated replanting programs, aimed at supplying higher quality seeds to help smallholder-farmers develop more productive palm oil plantations. He called on his administration to simplify procedures for farmers seeking to participate in the program. “Most importantly, the benefits get into the hands of farmers. We want, with this replanting, smallholder’s welfare to be improved,” he said.

Jokowi added that increased palm oil exports are important to the nation, as it is currently coping with a weakening rupiah, which has a multiplier effect in the national economy.

The palm oil plantation and processing industry, which contributes 2.46 percent of the country’s gross domestic product, has been the biggest earner of foreign exchange revenue among non-oil and gas commodities.

Last year, despite facing a continuous negative campaign by environmental activists and the imposition of trade barriers in some destination markets, Indonesia still managed to increase its palm oil exports by 25.7 percent to Rp 307 trillion ($20.4 billion). The top three markets are China, the European Union and India.

In his remarks during the event, Coordinating Economic Affairs Minister Darmin Nasution said the government acknowledged that the sector is experiencing significant challenges, with the price of crude palm oil on the global market having declined to $485 per ton by the end of October from $636 early this year.
Darmin explained that the current administration had initiated some policies and implemented programs to maintain palm oil as a strategic industry in the Indonesian economy.

“There are two sets of policies that have been prepared by the government to maintain the competitiveness of Indonesian palm oil. First, the policy set concerning supply of palm oil: oil palm moratorium; settlement of disputes in forest areas; one-map policy; strengthening of ISPO [Indonesian Sustainable Palm Oil system]; and adjustment of the export levy,” Darmin said.

“Second, the policy set concerning demand for palm oil, which includes: utilization of B20 [biodiesel]; and policy concerning CPO demand for use in domestic downstream products,” the minister said.

He added that on top to these two policy packages, the government also launched the replanting program, mentioned by President Jokowi earlier.

“Hopefully we can further reduce the gap between target and realization. This year, we launched 185,000 hectares. Third, I also ask for the participation of all parties, especially large companies, to contribute to the acceleration of smallholder plantations,” he said.

In a bid to accelerate the downstream sector within the palm oil industry, the government imposed an export levy in 2015, which is collected by the Indonesian Palm Oil Estate Fund (BPDP-KS). The fund is used to subsidize downstream players.
Darmin said Indonesia has managed to gradually increase exports of downstream CPO products. He said 56 percent of palm-related exports in 2008 consisted of crude palm oil, but after the cross-incentive program was implemented, the raw commodity only made up 24 percent of palm-related exports last year.

“It illustrates that the added value of the palm oil industry can be maintained domestically through palm oil derivative products,” he said.

Darmin said this policy has successful in providing incentives to the biodiesel industry. He said refineries were very profitable, with their margins currently at a 20-year high. “It is caused mainly by the overproduction situation, giving refineries stronger bargaining power, along with abundant CPO stocks in Indonesia,” he said.

However, the minister said the government also understands that due to the lower CPO price, the price of biodiesel has also gone down and become cheaper than the fossil fuel alternative. This means the “incentive for biodiesel is not needed,” he said.

Gapki chairman Joko Supriyono expressed his appreciation of the government’s support for the development of the downstream sector.

He said the government’s decision to make the use of fuel containing 20 percent bio-content (B20) mandatory has seen some positive results. Joko said the distribution of palm-oil based biofuel already increased to 2.1 million kiloliters by the third quarter of this year, against the target of 3.92 million kiloliters.

He added that greater use of biodiesel helps the country reduce costly oil imports.

“We hope that in the fourth quarter, this target can be achieved so that the foreign exchange saved through the B20 program reaches $2.1 billion. Our wish is that next year, efforts to increase exports can run better,” Joko said.

He also explained why the theme of this year’s event was related to the Sustainable Development Goals.

“The mission of the SDGs covers three dimensions of sustainable development, which are: economic, environmental and social. This year’s theme for IPOC is aimed at deeply analyzing the palm oil industry’s development and its contributions to the SDGs,” he said.

“Palm oil is the most suitable vegetable oil to meet the world’s needs because of its efficiency in land use and productivity, compared with other vegetable oils. The development of oil palm plantations in rural areas creates opportunities for villages to further improve their economic activities. This leads to better income and increased job opportunities for both men and women,” Joko said.