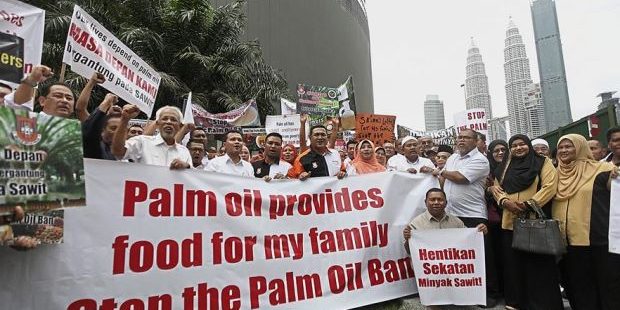 thestar.com.my | Friday, 2 March 2018
European Union (EU) Trade Commissioner Cecilia Malmstrom is in Singapore this week for the annual EU-Asean Economic Ministers Dialogue.
This year’s visit was shaping up to be a celebration. By many measures, the EU’s trade policy engagement in the region looks stronger than that of the United States. The EU-Japan free trade agreement (FTA) is close to ratification, as are agreements with Singapore and Vietnam. Talks to restart the EU-Asean FTA and EU-Malaysia FTA have gained momentum.
However, recent events in Brussels mean that Malmstrom will now be flying into a diplomatic dispute over palm oil.
Malaysians and Indonesians have reacted strongly to the European Parliament’s proposed ban on the use of palm oil in European biofuels programmes. Governments of both countries have made their opinions known via diplomatic channels and have promised action next month at the World Trade Organization (WTO).
The EU’s Directorate General of Trade – which Malmstrom leads – has shown some support for palm oil exporters. It has subtly distanced itself from the Parliament, as have some EU member governments, including France, Sweden and Italy.
For those of us outside Brussels, these nuances are almost meaningless. The unknowns of the Euro­pean Parliament, the bureaucrats of the European Commission and the leaders of the European Council all appear as a single entity.
Now EU lawmakers appear to be endorsing even the fringe demands of Greenpeace and Friends of the Earth. Malaysian and Indonesian leaders have therefore reached an obvious conclusion: the EU dislikes palm oil and is trying to ban it.
As much as the Commission may attempt to distinguish itself from the Parliament, it is no innocent in all this. It has contributed to this problem for several years with actions that denigrated palm oil in the eyes of lawmakers and the public.
Consider the ongoing Commis­sion funding of EU-based NGO reports and activities against oil palm cultivation and imports – reports that are erroneous, sensationalised and unbalanced. Of course, each of these is prefaced with a disclaimer stating that they “do not represent the views of the Commission”.
Consider also that the Commis­sion has generally remained silent on policy actions in member countries on palm oil that conflict with WTO rules and the EU treaties.
Or the imposition of anti-dumping duties on imported palm-based biodiesel that were recently walked back by the WTO.
Or the heavy emphasis on palm oil in all the Commission’s actions on deforestation, despite being a much lower contributor to deforestation than other commodities such as soy and beef.
Every one of these actions – or lack of – is a signal from the Com­mission that denigrating palm oil is not just tolerated, but endorsed.
National EU capitals have also been guilty of fostering anti-palm oil sentiment. Think of French parliamentarians proposing a 300% “Nutella tax” on palm imports, the United Kingdom’s ongoing funding of anti-palm oil groups under the foreign aid budget and major European exporters such as Germany doing precisely nothing to help their Asean trade partners.
These actions together created a political and media environment in Brussels that legitimised and even encouraged hostility towards palm oil.
The Commission cannot be surprised by the Parliament’s desire to ban palm oil, nor by the pushback from Malaysia and Indonesia.
Now, FTAs with both countries are at stake for Malmstrom.
In both the Malaysia-EU FTA and the EU-Indonesia agreement, the EU is seeking more liberalised rules on trade in services and investment.
In Indonesia, they are seeking greater access for goods. The opportunities for European exporters in Indonesia are large, given the sheer size of the economy and the growing middle class and population, with the latter equivalent to that of Germany, France, Italy and Spain.
In both cases, unfettered access to and equal treatment in European markets for palm oil is one of the overriding goals of regional palm oil stakeholders.
But the Parliament’s actions have taken away Malmstrom’s ability to singlehandedly guide trade policy objectives for palm oil at the European end.
This is why the Commission’s response to the European Parlia­ment’s actions is so significant. The Commission is supposed to have a global perspective and should understand that banning palm oil from a biofuels programme means unfair trade and worse development outcomes for the region. And that it also means European opportunities for exports and investment are diminished.
Up until this point, the EU had looked like an emerging leader on trade and development in the region.
For the Commission to see the agreements progress, it will have to actively push back against the European Parliament and provide reassurance that palm oil exports will be treated equally in the future.
There is a significant gap between the narrow interests of a minority of Europeans who clamour to ban palm oil and the broader interests of Europe in the Asean region, which would be harmed by such a ban. It is Malmstrom’s responsibility to bridge this gap.
Khalil Hegarty is a trade and sustainability consultant based in Melbourne, Australia. He has previously worked with the palm oil sector in Malaysia, Indonesia and Nigeria, as well as the forestry sector in Papua New Guinea, Indonesia, Italy, Korea and the United States. He has undertaken work on trade for a variety of other sectors, including financial services, agriculture and manufactured goods.