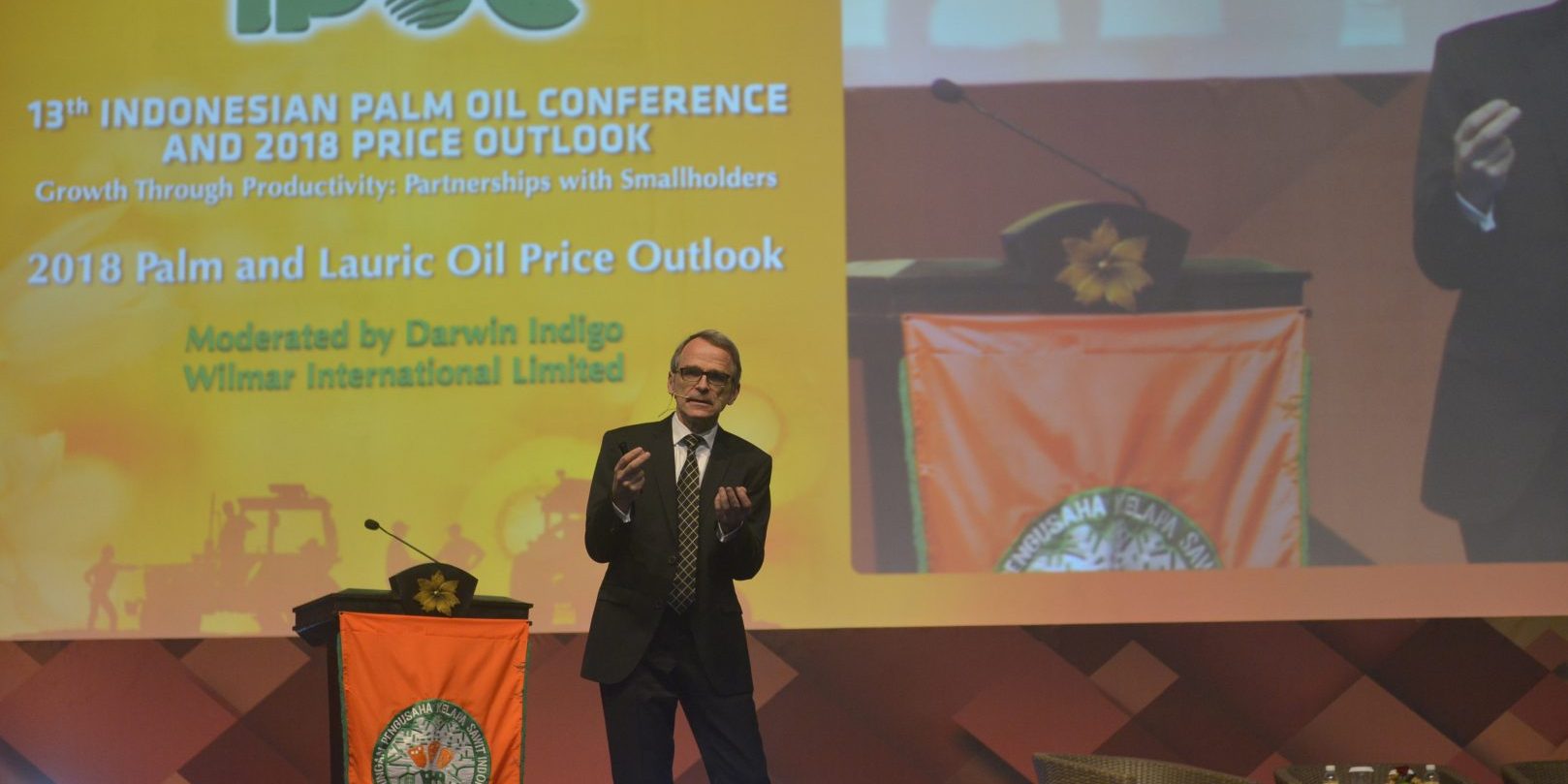 Some of the world’s biggest palm oil players will meet in Indonesia this week and just like two years ago, the weather will be a hot topic. But instead of the scorch of El Nino, this year the focus is on La Nina.
The conference will feature predictions from industry heavyweights Dorab Mistry of Godrej International Ltd., LMC International Ltd.’s Chairman James Fry and Oil World Executive Director Thomas Mielke. Here are the key topics to watch for:

The Long-Awaited Rebound
It’s been a year of two halves for palm oil. After slumping in the first half, futures have rebounded as a much-anticipated recovery in production missed expectations. The shortfall is especially apparent in No. 2 producer Malaysia where output in the second half, typically a high season, has also been stymied by a shortage of plantation workers.
Still, expectations remain that a big supply rebound is on the horizon as plantations finally shake off the lagged effects of the 2015-16 El Nino. Global production may climb by about 6 million tons next year – most of that from Indonesia and Malaysia – and a big question is whether demand will be enough to absorb it, according to Ling Ah Hong, director of plantation consultant Ganling Sdn.
“The market was caught off-guard when they saw third-quarter production was bad,” Ling said. “Next year we’ll see a very strong production of palm. Moving into April and May next year, prices may start to soften if production of palm oil starts to jump and stocks start to climb.” He expects prices to ease to average at 2,500 ringgit ($590) a ton in 2018, more than 10 percent less than the average of 2,820 ringgit this year.

A Little More Rain
La Nina-induced rain will be good for production because it will ensure sufficient water to trees, said Ling, who has 40 years of experience in the industry. The downside is that it could exacerbate monsoon rains and cause some flooding of low-lying areas. The Malaysian Meteorological Department told Bloomberg a weak La Nina doesn’t cause significant impact to rainfall distributions during the northeast monsoon.
“If the La Nina is just a very mild one, and production of soybean and palm are strong, then we’ll see a more bearish situation,” Ling said. “Prices may even drop down to 2,400 ringgit a ton by the end of 2018.”

Too Much La Nina Will Rain on the Bear Parade
A stronger La Nina could hurt soybean production in the U.S. and South America, and that’s key to palm oil, its closest substitute.
During the 2011-2012 La Nina, futures surged to a near three-year high of 3,955 ringgit a ton as La Nina witheredsoy crops in Latin America. At the same time, swathes of plantations in Malaysia’s key-producing states were inundated by flood waters, cutting production to the lowest in four years.
“Heavy rainfall complicates harvesting because you’ll have difficulty of evacuating crops,” said Peter Benjamin, CEO of Malaysian-listed planter United Malacca Bhd.  “Too much rainfall will also have an impact on pollination. We’ll have to keep a close watch on the La Nina effect.”

Fueling Prices with Biodiesel
The industry will also be watching a decision from the World Trade Organization on eliminating Europe’s anti-dumping barriers on biodiesel, according to Sahat Sinaga, executive director at the Indonesian Vegetable Oil Industry Association. Removing the barriers could increase demand for fatty acid methyl esters and boost biofuel consumption.
Meanwhile, higher crude oil prices could bolster demand for biofuels in the coming months, said Barnabas Gan, an economist at Oversea-Chinese Banking Corp. in Singapore.

Less Workers, Less Palm Oil
It’s a problem that’s plaguing the industry. In Malaysia, an estimated 10 percent of fruit bunches are left to rot each season because of worker shortages. While companies are turning to mechanization, harvesting still requires skilled labor that’s quickly become scarce. Malaysian planters are especially at risk because of their high dependence on foreign laborers, especially from Indonesia which are said to be the best palm oil harvesters in the world. “Now we are looking to Bangladesh and Nepal to bring in workers, but compared to the Indonesians, it takes time for them to adapt to plantation life,” United Malacca’s Benjamin said.

Agriculture companies ramp up use of technology
October 14, 2020