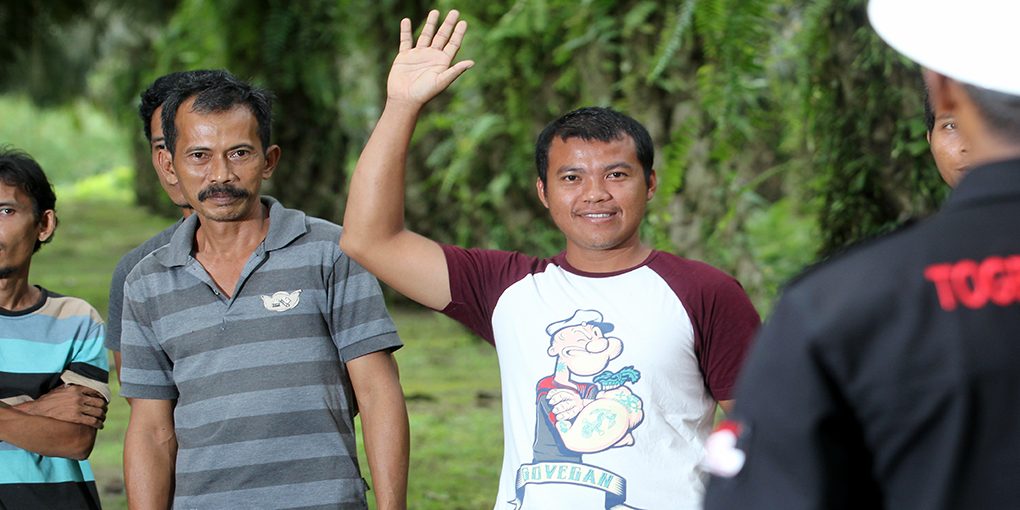 The Jakarta Post | Thursday, 5 April 2018
Some 25 years ago, Tugimin, 57 made one of the most important decisions of his life. Tugimin, was a corn farmer in 1993 when one of his friends urged him to turn to a more profitable commodity: palm oil. “I had no experience when I started [growing oil palm],” Tugimin said on Wednesday. “So I learned how to cultivate oil palm from my friend and, thank God, the results have satisfied me.”
But now Tugimin faces a serious problem that could threaten his business, a 2-hectare plantation located in Maligas Tonga Village, Simalungun, North Sumatra. His oil palm plantation needs to be replanted one of several methods advocated by experts as a way to ensure sustainability. However, he does not have the funds to do so.
“Replanting requires a lot of money,” said Tugimin, a father of four who also lives in Simalungun. The lion’s share of his profits go to providing for his family’s daily needs and his children’s education. “I’ve been saving money for the past six years, but it is still only a small amount.” Experts have said that independent smallholders scale farmers who are not linked to any particular company or mill Iike Tugimin must be prioritized if the government and companies are serious about making the palm oil industry sustainable.
However in a study, pubIished on Monday by the World Resource Institute Indonesia (WRI Indonesia), researchers argued that smallholders “have few, resources at their disposal” to start producing palm oil sustainably. “Most point to large corporations to solve the problems” within the palm oil industry, WRI researchers said, referring to the environmental and social issues NGOs have long blamed on the industry such as deforestation, forced labor and the diminishing populations of threatened species like orangutans.
“But that’s overlooking a key actor in palm oil production: small farmers.” Petani kecil swadaya (independent smallholders) face constraints like limited support from the government, companies and banks, as well as their vulnerability to exploitation.
They currently manage around 25 percent of all oil palm plantations in Indonesia, totalling around 11.4 miliion ha based on a government estimate. Thanks to the increasing global demand for palm oil, smallholders and small-scale farmers tied to companies, known as plasma farmers, are set to manage 60 percent of Indonesia’s oil palm plantations by 2030, according to the Palm Oil Agribusiness Strategic Policy Initiative PASPl.
Achieving sustainability in the palm oil industry is about not neglecting the negative impacts on the environment, such as possible forest and land fires,” said Fitrian Andriansyah of the Sustainable Trade Initiative (IDH), a foundation that promotes market transformation through sustainabie supply chains. “As well as ensuring that workers and farmers are not left behind socially and economically,” Fitrian added.
The more productive an oil palm plantation is, the smaller the environmental impact, Fitrian said, adding that this was why replanting was important, as it reduced the need for farmers to clear new areas, especially forests, for expansion.
Fitrian said parties like banks and the Indonesian Oil Palm Estate Fund (BPDP-KS) a government sanctioned agency that collects palm oil product export Ievies to finance sustainability initiatives needed to pay more attention to smallholders to help finance replanting activities.
According to various estimates, replanting oil paims can cost smallholders between Rp 60 million (US$4,200) and Rp 92 million per ha.